What’s the difference between clarified butter, ghee, Ghruta and Ghrita?

You may have heard the terms clarified butter vs ghee vs Ghruta (or Ghrta and Ghrita) being used interchangeably. All of these products have been referred to in Ayurveda as liquid gold, due to their innumerable health benefits.

Naturally, this has led many people to confusion.

While these substances are similar in a lot of ways, they’re not actually the same. They are processed and cooked differently, and this has a significant impact on the taste, smell, and health benefits of the finished product.

Understanding the difference between these products can help you understand how to best use them for your health and well-being.

We’ll start from the bottom. Clarified butter and ghee are very similar – to the untrained eye, they might be seen as the same thing. Rest assured, they are not.

Clarified butter is also sometimes referred to as drawn butter. Normally, butter is a concoction of a number of things: butterfat, milk solids, and water. Clarified butter, on the other hand, is butter with the milk solids removed. It is thus considered ‘clear,’ or clarified.

Clarified butter can be made quite easily – all you have to do is simmer some unsalted butter in a pan over low heat. Firstly, the butter will begin to foam as the water evaporates. After this, white chunks will begin to form.

These clumpy white things are milk solids. Once they sink to the bottom of the pan, you can pour the whole concoction through a lined strainer. The resulting liquid is your clarified butter.

That sounds pretty similar to the process for making ghee, right? Right.

Once the milk solids fall to the bottom of the pan, the clarified butter is cooked for a bit longer. The milk solids will turn brown and begin to release a warm, toasty taste and smell. After the milk solids are strained, ghee is produced.

Ghruta is a different process entirely.

Instead of simply heating butter and straining it, Ghruta is made through the traditional hand-crafted Ayurvedic process in which:


This much more complicated procedure significantly improves upon the already impressive health benefits of ghee. The end result of this process is a powerful, tridoshic substance that can be incredibly healing. Its flavor is further enhanced when compared to ghee, and its chemical makeup is different.

Because of the intensive process involved, Ghruta has a unique lipid profile when compared to ghee. The lipids are purified, allowing them to interact more effectively with the body. This allows for Ghruta to potentially reduce cholesterol levels in the body. It also won’t cause the same immunological reactions that some other lipid molecules are known to cause.

Authentic and pure Ghruta can help to enhance agni, and is said to look, taste, and smell the same as pure ojas. It is believed clarified butter is a tamasic food, while Ghruta is sattvic.

Furthermore, Ghruta is only made from the Indian Gir cows. These cows hold great significance for the Hindi people, who believe that the large hump on its back is able to transmute sunlight into bioavailable nutrition.

The Gir cows also produce a different type of milk from Jersey cows, which are most commonly used to make ghee in the West. The latter produces A1 proteins; Gir cows produce A2 proteins which contains beta-casein proteins that are much easier to digest.

Ghruta vs Ghrita vs Ghrta

It’s important to note that Ghruta, also known as Ghrita, is the Ayurvedic term for ghee, which is derived from the Sanskrit word Ghrta. In current conversation and literature, the terms Ghruta or Ghrita and ghee are often used interchangeably, but they can have different meanings depending on how they were produced. If the ghee is produced using traditional Ayurveda methods, it is typically called Ayurvedic ghee or Ghruta or Ghrita.

Despite the confusion between Ghrita and Ghruta, there are lots of clear differences between clarified butter vs ghee in Ayurveda. Hopefully, this article has clarified some of these differences for you. 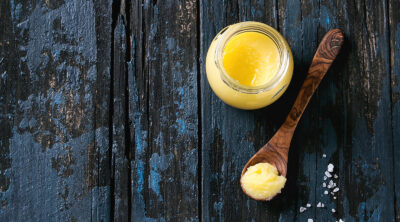 How To Use Ghee 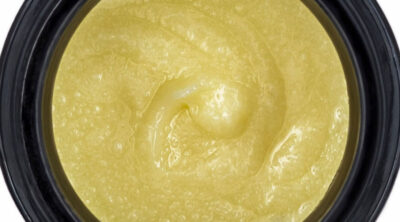 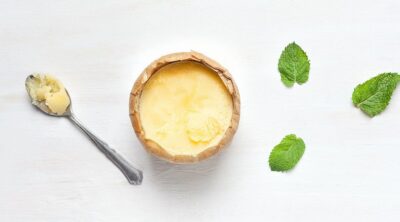